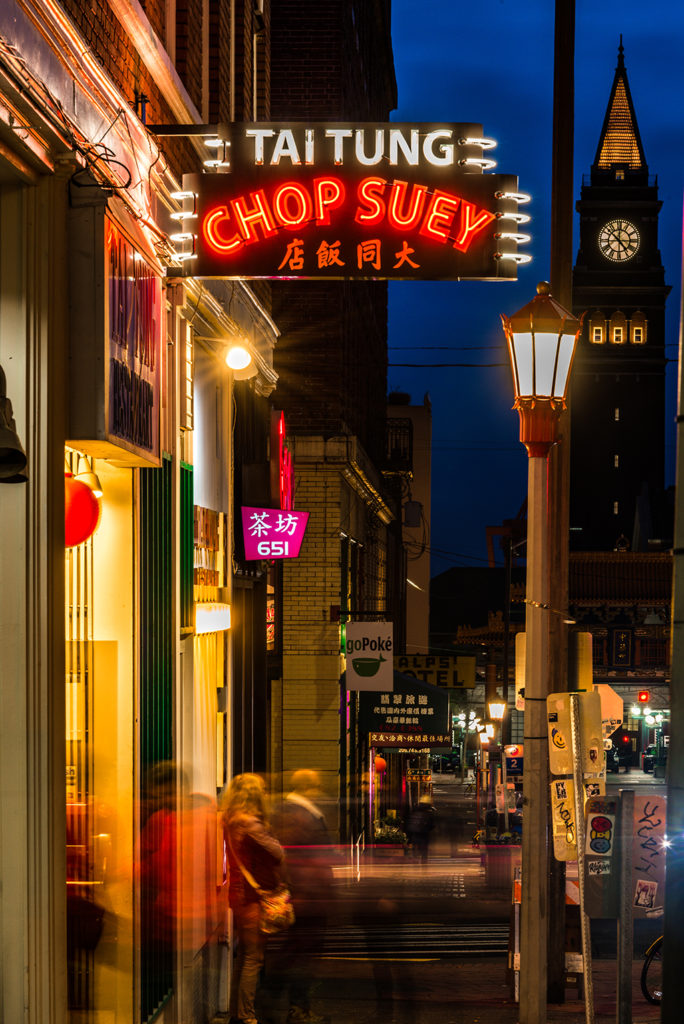 Driving thousands of miles along the American West through small towns and off-the-beaten-paths, I was on an mission to document the last of Chinese Americana. “Chop suey houses”.  They once lit up the evening sky with their bright neon signage and  filled many-an-insatiable appetite with distinctive fare such as Egg Foo Young, Almond Chicken, Chop Suey, and Hot dog sandwiches.  As a son of a restaurateur I grew up working at a Chop Suey house busing tables to helping in the kitchen.  As time went on, I watch as these type of restaurant  gradually disappear.  Just like the Roadside Dinners that once dotted the two lane highways.

The idea for this photographic project, sprung out of an idea for a coffee table book and was assisted by a Washington State King County Arts Commission grant in 1991, My focus in the beginning was to just document the outside neon signs that are used to attract customers with catchy names like “Flower Drum” or overuse images like dragons or rickshaws.  As the years flew by and I switch from film to digital my project evolved into a fine arts photographic essay.

So what is Chop Suey?  According to a favored bit of lore, my dad told me a resourceful cook  whipped up a dish of leftover meat and vegetables for a group of drunken miners that came in while he was closing.  Another story was how immigrant Chinese cooks charged with feeding laborers on the Pacific Railroad in California around the mid-1800s.  The only food they had to cook for dinner was what  leftover odds and ends they could find and then cooked all together.  When asked what it was  they called it chop suey.

Some believe chop suey has a New York City origin, and go so far as to claim it was invented in 1896 by Chinese Ambassador Li Hung-Chang’s chef.  They  claim the Ambassador often suffered acute indigestion after being plied with rich foods at obligatory banquets.  His aide recommended a bland diet for the stricken Ambassador, and together they concocted chop suey. The problem with this story is the 1896 date.  Seeing the Oxford English Dictionary’s first citation of “chop suey” comes from 1888, with said entry showing the term was even at that earlier date in widespread use around the country.

Possibly the dish came about because early Chinese miners and railway workers cooked together whatever vegetables and meats they had. In The Dictionary of American Food and Drink, John Mariani says the Mandarin words for chopped up odds and ends are “tsa sui,” which is close enough to “chop suey” to support this theory.  So is the Oxford English Dictionary   claim of the Cantonese “shap sui” (“mixed bits”) being anglicized into “chop suey.” and the Cantonese origin theory is even stronger, in that of most of the first Chinese immigrants came from the Canton area.