My dinner while camping on the Washington coast. I kind of cheated, I did prepare my dinner at my camp site but the salad was a bag salad kit with dressing.  My steak was cooked at home using a sous vide bath.  I left it in the  vacuum sealed bag I cooked in and packed with my other cold food items.  Now all I had to do at dinner time was cut open the package and sear it on the cast iron wok or grill it. 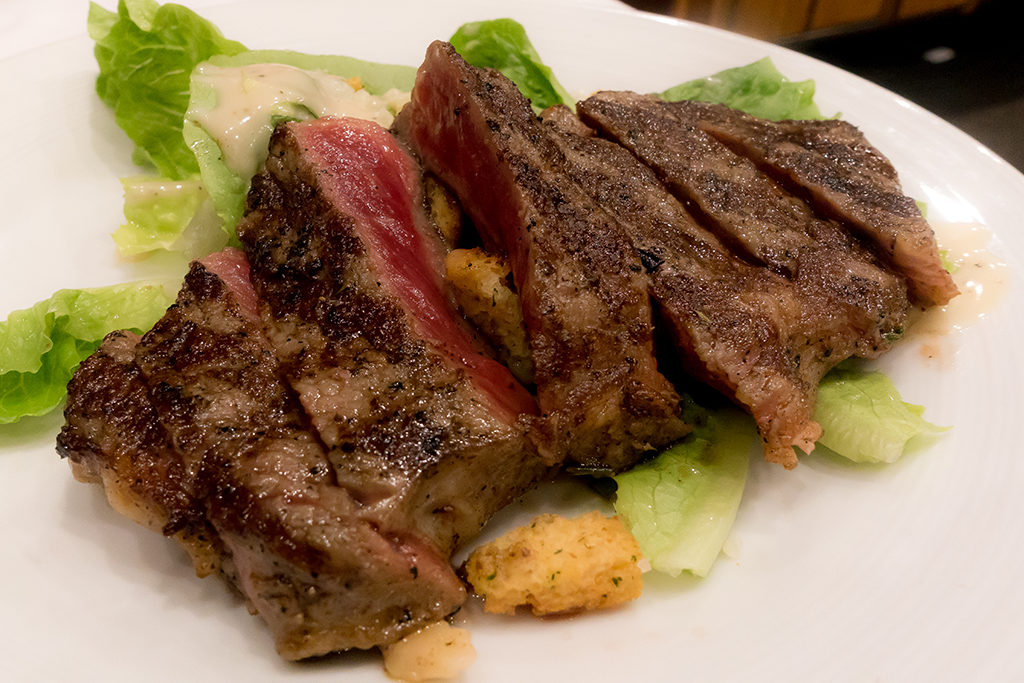 The people of Maui voted Cool Cat Cafe in Lahaina   for thirteen years in a row Best Burger on Maui.  I had it on my must try bucket list, so on a cruise to Maui I told my wife we had to try this place. They have thirteen burgers to choose from.  Each one begins with 100% certified Angus Beef – always fresh, never frozen.  Each Cool Cat burger is then topped with their own blend of spices and cooked to order. Their fantastic buns are baked fresh daily from a local bakery. 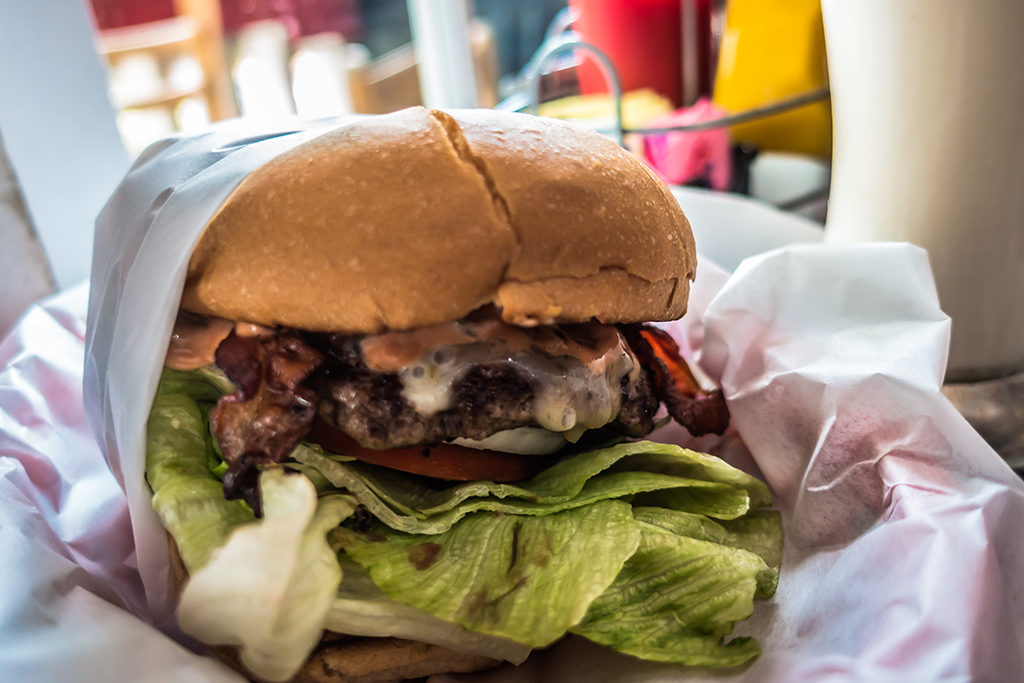 Da Dong’s ability to transcend the duck genre is marked by its repeated wins as “Best Chinese Restaurant of the Year” in the Beijinger’s annual Reader Restaurant Awards. Try dipping a slice of duck in the sugar provided alongside other condiments – somehow, it works beautifully. The 160-page menu is a work of art in itself, with a plethora of duck dishes backed up by vegetable dishes, soups and more. If you’re only going to eat duck once in Beijing, book a table – or else be prepared to wait for one – at Da Dong. Voted best “Chinese Restaurant of the Year,” “Beijing Duck” and “Best for Impressing Visitors” in the 2011 Reader Restaurant Awards.

Tucked behind Dongzhimen Gate, Guijie Street stretches from Dongzhimen Overpass in the east to East Jiaodaokou Street in the west. More than 150 storefronts are scattered along this street, 90% of which are restaurants. Ghost street never closes, making it one of Beijing’s most buzzing streets, and it’s especially fun on Friday and Saturday nights. Most styles of Chinese cuisine are represented on Ghost Street, but it’s best known for its hotpot and spicy seafood restaurants. The giant Xiǎo Yú Shān is always jammed with people cracking open crayfish and shrimp. For classic Beijing-style hotpot, try Supreme Hotpot.

As to the name origin of this street, there is an interesting anecdote. In the Qing Dynasty (1644-1911), vendors selling groceries, vegetables, and fruits around Dongzhimen Gate often started trading at midnight and ended by early dawn. The dim light emitted by their oil lamps looked very ghostly in the darkness. Therefore, this place was called “Ghost Street (鬼街, guǐ jiē)” by locals. In the late 1980s, lots of food shops opened here, gradually turning the street from a trading market to a food street. Later on, with the purpose of weakening the mysterious ghost overtones and enhancing food culture of the street, the Commerce Commission decided to change the name to Guijie Street (簋街, which is pronounced the same as Ghost Street in Chinese). Instead of the character Gui (鬼), which refers to ghost or evil spirits, the character Gui (簋) means a bronze vessel with a round mouth and two or four handles, mostly used to contain food in ancient times. Therefore, the modified name is more related to food. 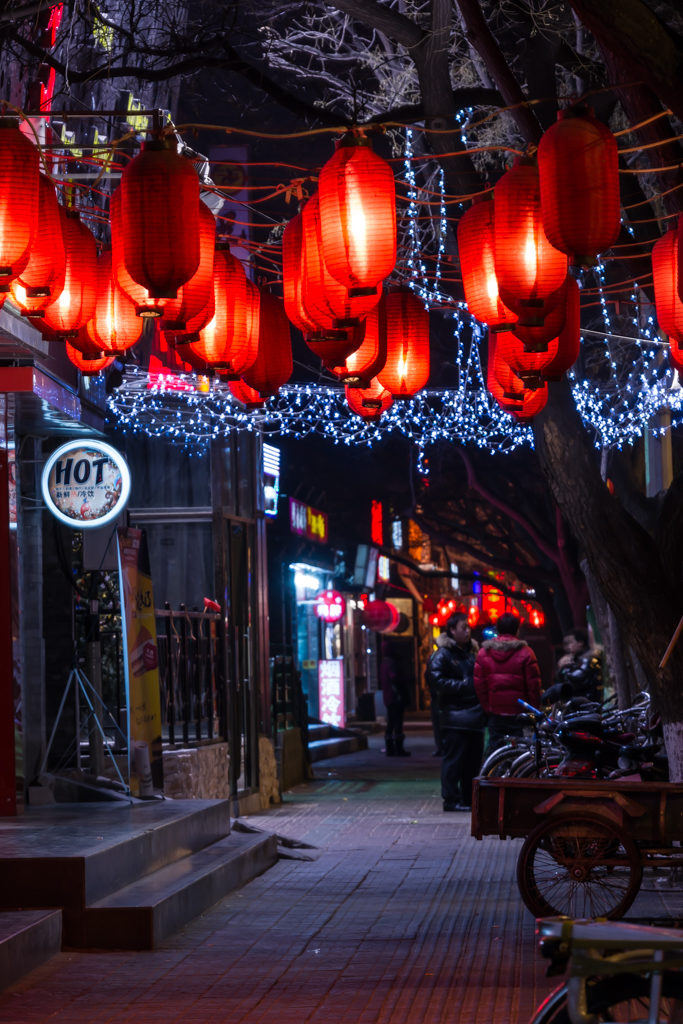 Sushi Rock’s slogan “Come Taste the Love” is the tag line that guides them.  Every plate is prepared with care and pride and presented with the hope that you can feel, and yes taste the love that they put into it.  The imaginative preparations, local and mostly organic ingredients and a casual atmosphere make Sushi Rock a locals’ favorite.

Here is one you will not find anywhere else… The roll in the photo is a Capt’n crunch with beef tenderloin…. 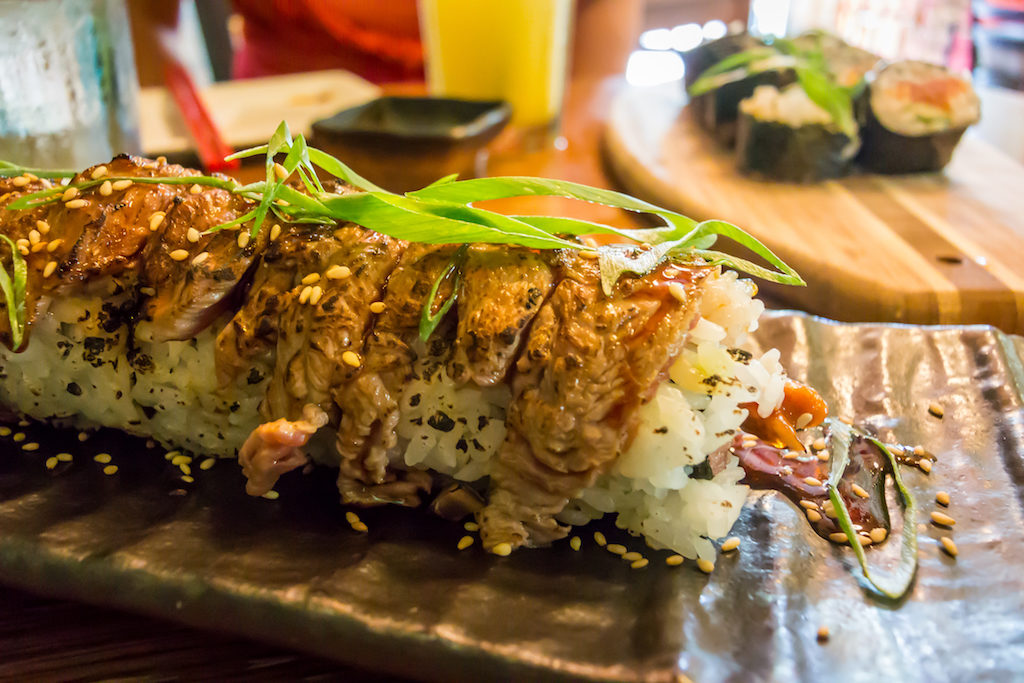 With a nice ‘n runny over easy egg on top!.. da’ only way fo’ eat one LocoMoco, So “Chili Moco”, I thought, “Well I like Zippy’s Chili, and love Loco Moco, so that must taste amazing when put together.” The waiter came and I immediately asked for the Chili Moco.  A layer of rice, below a hamburger patty topped with a egg and loaded with Chili; It was amazing…. 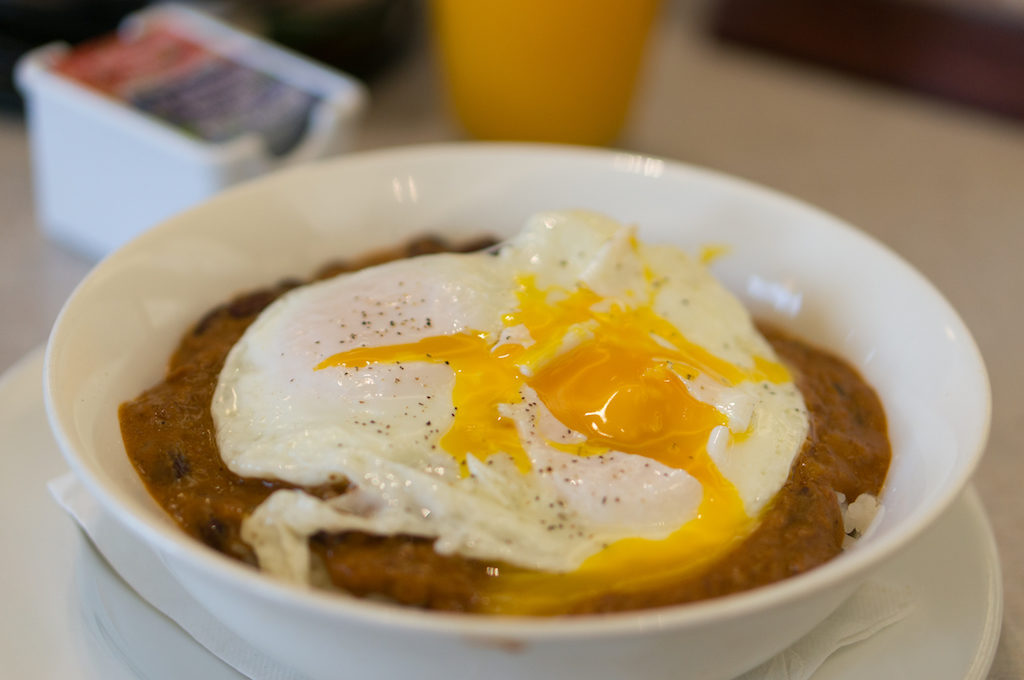 Hana is open for lunch and dinner. You’ll enjoy well-prepared meals such as the oyako donburi, which is chicken and egg over rice, or the clams in bonito broth. Hana’s delicious tempura udon even made the Seattle Weekly News Seattle’s Top 10 Soups list. This family-friendly restaurant also offers catering services.

Eat Street is a feast in every sense.  Hailed as one of the best spots in Brisbane for an epic feed, Eat Street Northshore at Hamilton Wharf have been filling up the bellies of hungry Brisbane foodies every Friday, Saturday and Sunday.

Nestled amongst brightly coloured shipping containers, and under cover of thousands of twinkling fairy lights, Eat Street Northshore hosts some of the very best food, homewares, fashion and curious stalls in Brisbane, and is the perfect spot to indulge if you like choice. From woodfired pizzas, to bangin’ burgers, Japanese pancakes, to freshly shucked oysters, hot doughnuts to epic mega shakes, even vintage fashions and gorgeous homewares;  Eat Street Northshore is a foodie loving, shopping addict’s paradise!

George and Manolis Alpogianis opened their first America’s Dog restaurant in 1996 on Navy Pier, with a menu based on a cross-country road trip they spent tasting hot dogs outside of the celery salt-sport pepper-no ketchup world of Chicago.

The proper way to place your order is to say:  “I’ll take a Chicago Dog with the works”  First of all, it is important to say “Chicago Dog” when placing your order. This sends a clear message that you want an all beef Hot Dog served on a steamed poppy seed bun. ” with the works” or “with everything” you are saying that you want yellow mustard, bright green relish, onions, tomato wedges, pickle spear, sport peppers and a dash of celery salt on your Dog. 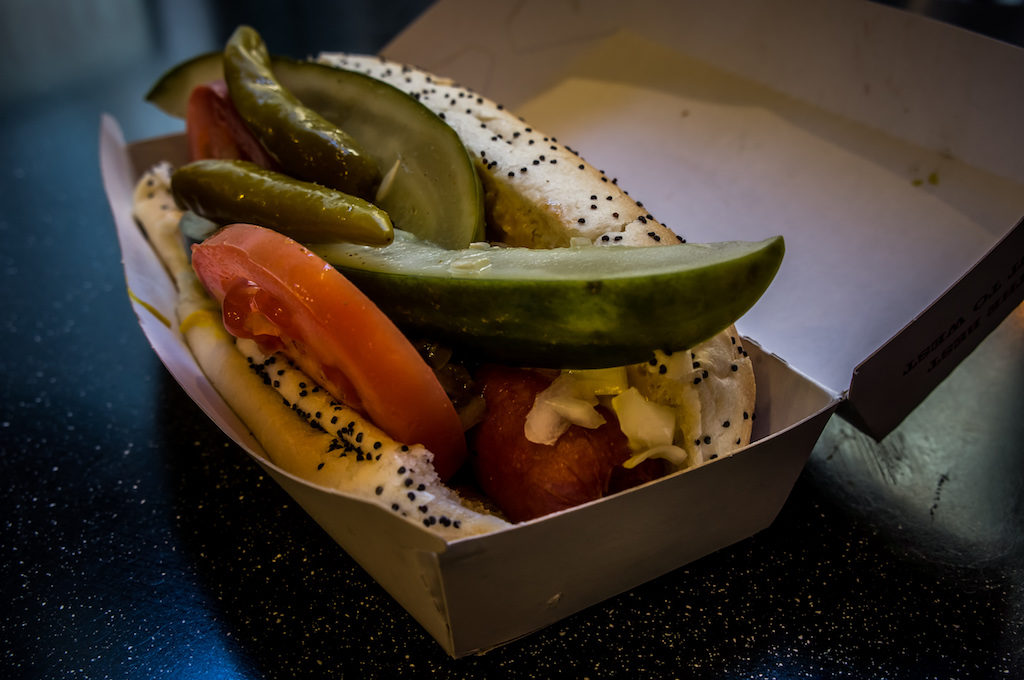 Wangfujing street Beijing, shopping and food within walking distance of Forbidden City.  You will find a dazzling array of snacks from all corners of China can be found here. The majority of diners here are tourist, and the prices are marked up. However, if you wish to see and try more exotic dishes like. Pigeon, seahorse, starfish, snakes, scorpions, grasshoppers – all of which are fried and sold on a thin stick, this is where you find them.
Location: south of Haoyou Department Store, Wangfujing Business Street, Dongcheng District
Bus Route: 20, 37, 41, 59, 103, 104, 120, 420, 802 (get off at Wangfujing Stop)

Kyoto Style Ramen at Tentenyu, their ramen is all about the cloudy chicken broth base that is famous in Kyoto , as opposed to the pork broth tonkatsu you find at Kizuki.  The original Tentenyu is the longest operating ramen restaurant in the Ichijoji area of Kyoto. Referred to as “Ramen Street” Ichijoji has a reputation for its fiercely competitive, dense-collection of ramen restaurants. As the longest survivor and winner of “Best Ramen” in 2011, Tentenyu is an obvious stand-out and destination. 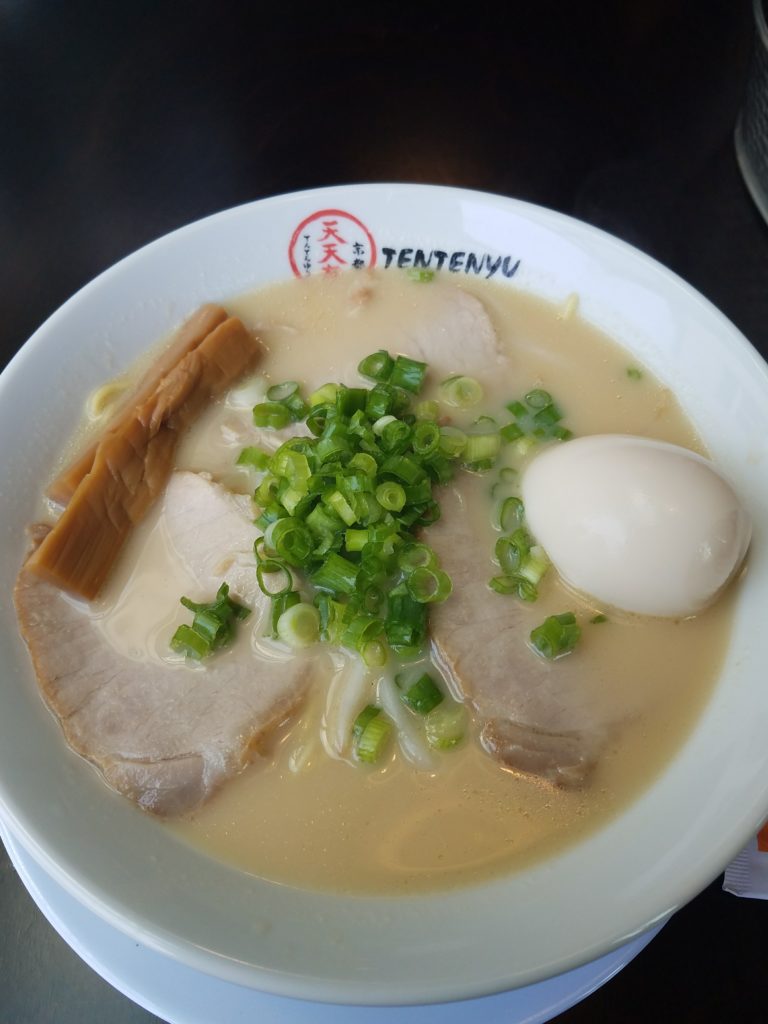 Seattle’s KFC (Korean Fried Chicken) The main diffrence Korean fried chicken is double fried… so  the meat is moist and  fried to extra-crispy perfection, Korean-style, then dipped in the likes of sesame soy garlic or Korean barbecue sauce. The menu also features rice bowls and chicken sandwiches, including an outstanding yuzu green chile version, plus sides like kimchi mac and cheese ( favorite), ginger coleslaw, and biscuits. 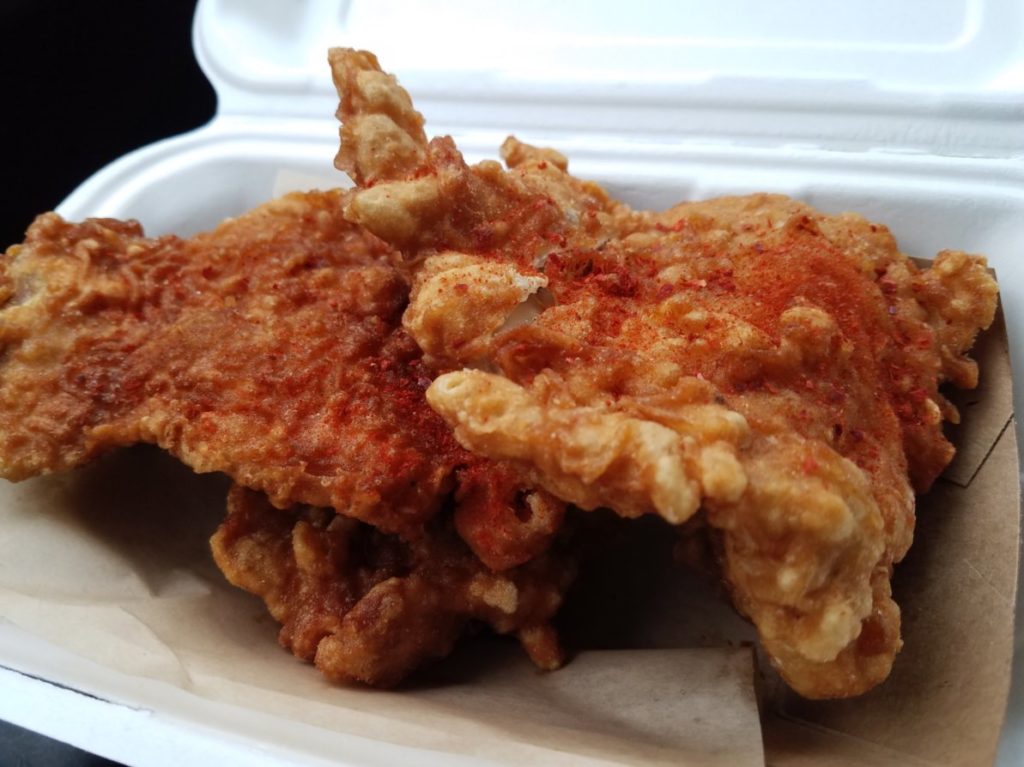 DIY Teppan, Customers can cook their own teppanyaki meals on custom iron plates.   Chef and Owner Jacky Lo  latest creations include, Pork Belly and Black Pepper Sirloin Pasta. Pork Belly is slow cooked, then grilled on the iron plate and served with housemade Kimchi, a classic Korean side dish that is made from fermented vegetables.  Black Pepper Sirloin Pasta, served with spaghetti and black paper sauce,

Sydney’s Newtown, offers Street food, but not like how your grandma remembers. Think … Asian fusion street food like Taiwanese baos and bao burgers (which it calls baogers, a cheeseburger between toasted bao buns). 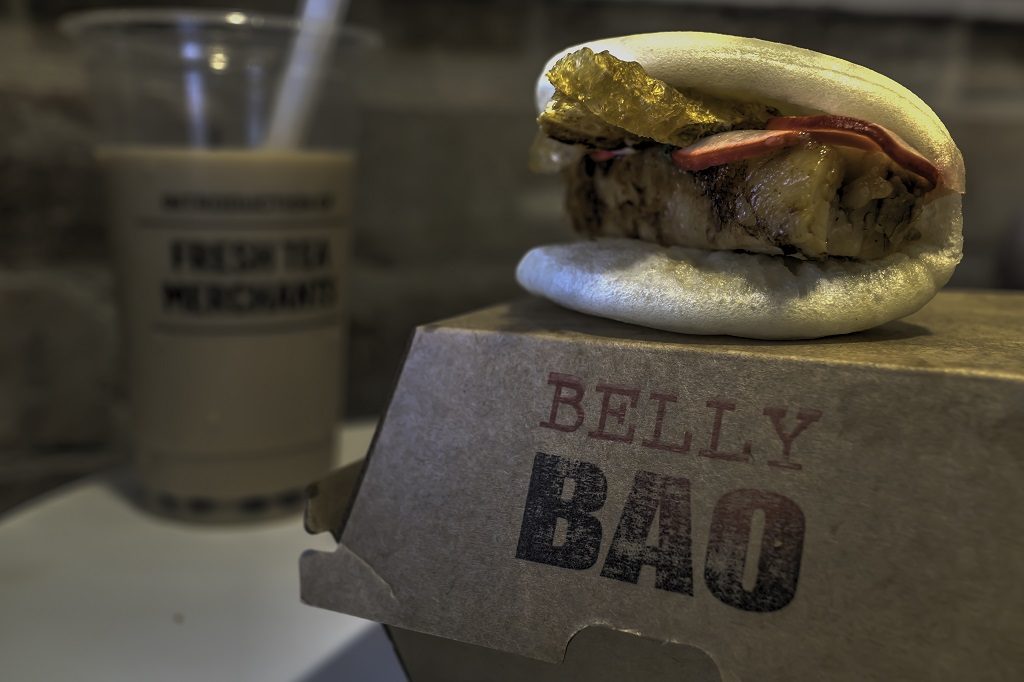 Known for its small, square hamburgers. Sometimes referred to as “sliders”, the burgers were initially priced at five cents until 1929 and remained at ten cents until 1949.

On January 14, 2014, Time labeled the White Castle slider the most influential burger of all time 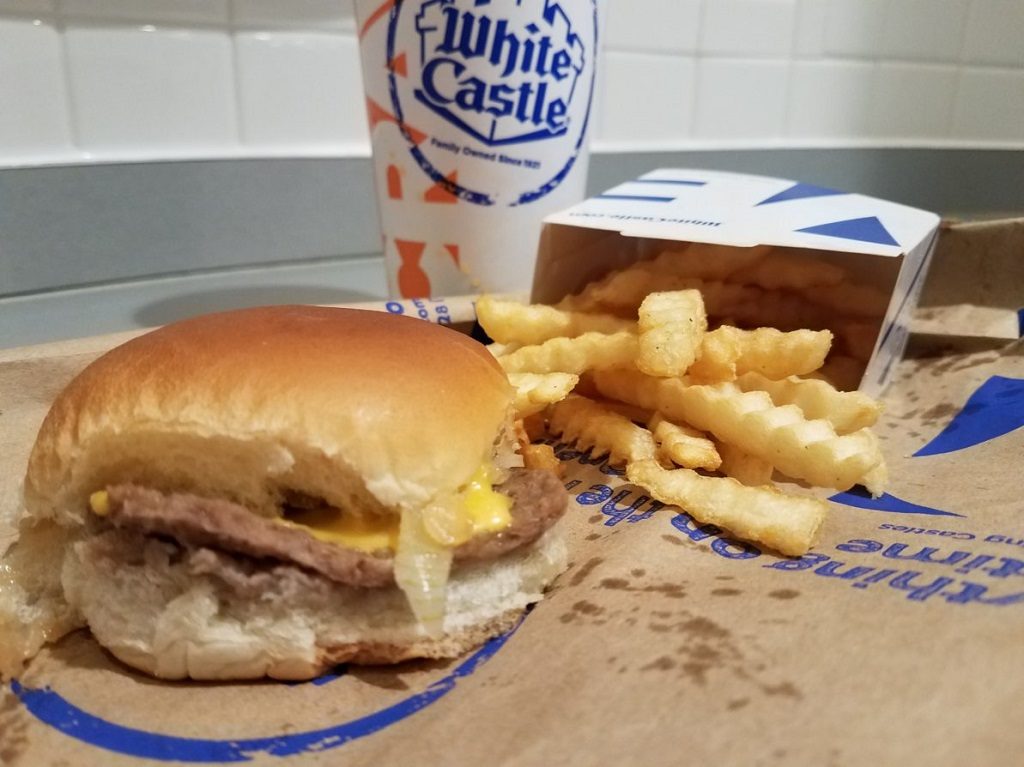